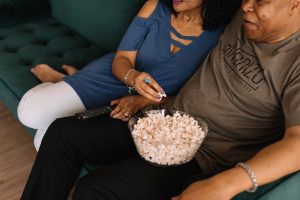 WSJ states: The Australian study offers a different take. “It’s not the sweaty type of exercise we’re losing,” says David Dunstan, a researcher at Baker IDI Heart and Diabetes Institute, Melbourne, who led the study. “It’s the incidental moving around, walking around, standing up and utilizing muscles that [doesn’t happen] when we’re plunked on a couch in front of a television.” Indeed, participants in the study reported getting between 30 and 45 minutes of exercise a day, on average.

I’ve already posted on how TV exposure in young children leads to an increased risk of ADHD. This study says it also increases the risk of death for the parents who are sitting next to the children.