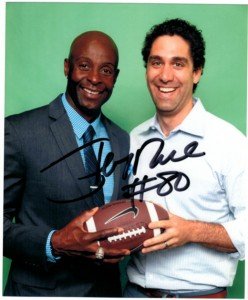 “Rice, as always, remains a man on the move. Besides his new job as an analyst for ESPN, he has taken a role as a spokesman for the Foundation of Chiropractic Progress.

He had twice-a-week chiropractic appointments during his playing days, a regimen he learned from former running back Roger Craig in 1986. “After taking so many vicious hits and all that, your body is going to get out of alignment,” Rice said.

Rice continues to seek treatment in retirement and found it extra helpful during his “Dancing With the Stars” competition.

Whether you are a dancer or a football player (or both), ProActive Chiropractic can help get you back to work and back to play.