Dog in a Tree=Better Health

Let’s face it: our dogs make us do things we don’t want to do even if it’s just a quick walk when we’re tired or it’s gross outside. My dog inspires me or nags me (depending on my energy level) to get up and go. We hike the gorgeous Bay Area trails, mountain bike the Marin ridges, and, on rare occasions, even climb a tree (see below).

Now there is research to prove the benefits of caring for your dog’s exercise needs.

Dogs are not just loyal companions, they are also good for your health, according to studies presented at APHA’s 140th Annual Meeting.

They say “the body of knowledge around dog walking is “relatively young.” But there is a “robust body of evidence” as to the health benefits of pets, including lower cholesterol and blood pressure, reduced stress, improved mental health, speedier recovery and increased longevity after heart attack and better quality of life among older adults.

APHA member Ann Toohey, a PhD student at the University of Calgary, recently participated in a study that found frequent dog walkers were more than 10 times more likely to meet the recommended guideline of 150 minutes of weekly physical activity. 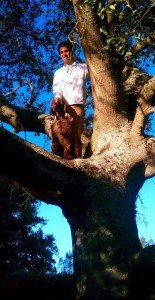 In this photo, you can see the tree my dog, his squirrel, and I ended up in. Samson was chasing a squirrel that tried to escape up this tree which left Samson circling and hopping among the roots. Their shenanigans inspired me to climb into the tree. When Samson saw I could do it, he didn’t want to get left out so he hopped up himself. He’s part dog, part kangaroo. It had been a while since I climbed a tree, but it was worth it to be surrounded by leaves and to see my four-legged pal up in the branches. FYI, it’s easier for dogs to get into trees than out of them.