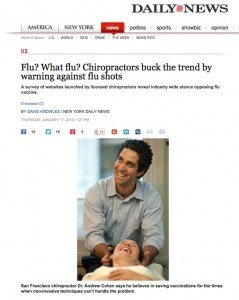 When a reporter from The New York Daily News contacted me about my opinion on the flu shot, I gave it. The enormity of the gap between what I said and what he implies that I said is almost funny, but, hey, that’s how it goes, I guess. Regardless, I think the answers I emailed him are balanced, well-supported, and worth sharing so I’m including my full responses – word-for-word – along with the reporter’s questions. You’ll notice that I actually provided him the CDC research he refers to in his article, a fact he obfuscates.

Do patients often ask you about getting the flu shot?
Occasionally, patients who’ve gotten sick despite getting a flu shot ask me for advice on how to actually not get sick. Chiropractic patients tend to be well-educated, critical thinkers who investigate their care and value the conservative nature of chiropractic. They feel inundated by ads for the flu shot and are curious about the effectiveness and risks.

What do you think the specific risks are for the flu shot?
I personally don’t get the flu shot and neither does my wife. It’s not because of the risks; it’s because of the benefits. The CDC describes the risks and I point my patients who ask about the shot to their website. For me, it’s not a cost analysis; it’s a cost-benefit analysis and the benefits don’t persuade me. This article in Scientific American sums it up nicely: some years the vaccination helps and some years it performs pretty poorly. Overall, your risk of contracting the flu without the shot are 4%. With the shot, it’s 1%. I work really hard at moving myself into the 96% by relying on tried-and-true, old-fashioned, conservative techniques that don’t require a shot and don’t have risks:

It’s significant that the benefits for toddlers and seniors are even smaller. Here’re some articles to check out.

An older study (a meta-analysis) showed that the flu shot was significantly effective in decreasing the flu. Later we found there were major flaws with the design and those findings haven’t been reproducible.

According to Scientific American, “July 2012 Cochrane Collaboration systematic review concluded that for kids under the age of two, the currently licensed vaccines “are not significantly more efficacious than placebo.”

For info on the lack of evidence in the elderly population:
http://www.thelancet.com/journals/lancet/article/PIIS0140673608611605/abstract

Why do you think chiropractors, in general, are hesitant to recommend getting flu shots?

Chiropractors are focused on providing healthcare education so patients can weigh the pros and cons. I (we) don’t have an intrinsic opposition to flu shots or medications in general. Obviously, vaccinations have made society safer, but we we support taking the most conservative approach first and saving medications, vaccinations, and other invasive options for the times when non-invasive techniques can’t handle the problem. There are vulnerable populations for whom vaccination makes sense, but it’s clear to me from the scientific studies that it’s not the entire population.

I understand there is only a certain amount of space in an article so I don’t harbor any negative feelings towards the journalist and I’m happy to speak to other reporters in the future about health related topics.