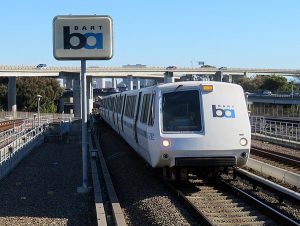 Next time you visit ProActive Chiropractic in the San Francisco Financial District, take the BART to the Montgomery station to get out of pain and lose weight. Actually, you have to take the BART daily for 6 months, and this translates into an average loss of 6.45 pounds, according to a research study covered by the New York Times.

“…residents surveyed who stopped driving to work and started walking to the light rail (sometimes taking a bus to a bus stop, then walking from there to the rail stop) walked on average 1.2 miles over their two commutes. And yes, it translated into a change in B.M.I: the average weight reduction found (after about six months of light-rail use) was 1.18 B.M.I. points.

Which means what exactly? “If you took someone who’s 5-foot-5 and weighs 150 pounds, that would be 6.45 pounds of weight loss,” said Dr. MacDonald, whose results were published in the August issue of The American Journal of Preventive Medicine. What does the South Beach diet have on that? Come to think of it, what does any weight-loss gimmick have on that?” the authors write.

I agree that is a sustainable and impressive improvement in BMI and weight.  Plus it’s good for the environment and your stress level. Being stuck in San Francisco traffic has been shown to raise your blood pressure due to noise. Don’t forget to wear earplugs on BART, it can get loud.