In the past couple years, it’s grown harder to accommodate same day appointments for our patients and sometimes it’s up to a five day wait to get a new patient appointment. This is a good problem to have in that it shows we’re doing something right at ProActive Chiropractic (we think we are). Luckily, beginning Monday, November 16th, we have another doctor joining our team.

We’re pleased to add Andrea L. Schilling, DC, CCSP®, a sports doc who’s had her own practice just two blocks away. Dr. Schilling and Dr. Cohen first met a few years ago working a large sporting event. Now they’re joining forces to build ProActive Chiropractic. “It’s rare to find a chiropractor with such a similar focus,  so I’m ecstatic to be working together,” says Dr. Cohen.

Patients who are use to seeing Dr. Cohen won’t notice much of a change as both Drs. Schilling and Cohen work in the same way and style. A huge advantage is now we can keep the office open more hours and keep you covered as you’re training for your event or getting you back to work to hit that deadline. We can even keep you taken care of while we’re out working with Team USA or at local races.

A little background on Dr. Schilling: 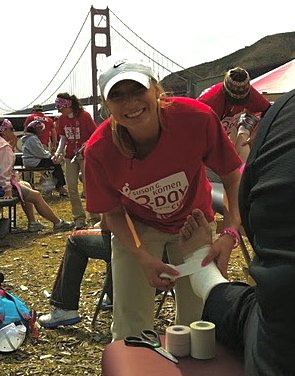 Andrea L. Schilling, DC, CCSP® grew up in California, where her life revolved around sports. She received her first chiropractic adjustment in high school after falling eight feet out of a cheerleading aerial. An aside: research shows that cheering leads to more sport injuries for young women than any other sport.
Following the injury, she was barely able to stand. After one adjustment, she was able to walk and run like a kid again and she knew that chiropractic provided a type of healing unlike anything else she had ever experienced.

Dr. Schilling attended undergraduate school in her hometown of Fresno, where she studied kinesiology with an emphasis in exercise science. While in school, she realized that chiropractic care and exercise science, when combined, could have a profound impact on a person’s quality of life. After interviewing several chiropractic colleges, she chose to attend Palmer West College of Chiropractic because of their reputation in the sports chiropractic community. While attending chiropractic school, Dr. Schilling had the privilege of working directly with athletes at a variety of sporting events, including the Susan G. Komen Race for the Cure, largest and best-funded breast cancer organization in the United States; The Sea Otter Classic, the biggest cycling and outdoor sports festival in the country; the San Francisco Half Marathon; and more.

Dr. Schilling is proud to have helped so many athletes get back into the game. She would be honored to help you, too!