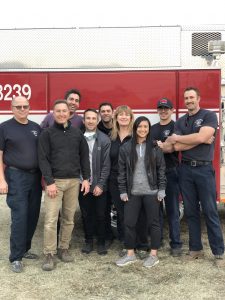 One of the attractions about living in the city is how active everyone is. Thousands of people swarm the streets of San Francisco for various reasons -whether it be for work or play. Countless events, marathons, walks, and races have been hosted here; some we have had the pleasure of working at. The North Face Endurance Challenge was one, in particular, we were extremely excited to be a part of again for the third time this year. However, when Camp Fire lit and made San Francisco’s air quality five times as bad as the air in Beijing, our lively city became bare and the Endurance Challenge was sadly canceled.

On November 18th, instead of gearing up to treat runners in the city, we made our way to the Incident Base at the Silver Dollar Fairgrounds in Chico to give care to the firefighters who have been heroically saving the victims and containing what is known as the deadliest and most destructive wildfire in California history. The Incident Base was full of firetrucks, firefighters, and various volunteers: twelve chiropractors, four massage therapists, an acupuncturist, musicians, and artists. As firefighters steadily rolled in from their 12- or 24-hour shifts, they were overly grateful to us for being there for them. We could not help but think: what do you mean? We should be thanking them! We saw about a hundred firefighters from all over California, Washington, and even Utah. Some as young as twenty years old to those that have been in the academy for over thirty years; all full of soot, ash, sweat, and gratitude. And most mask-less. 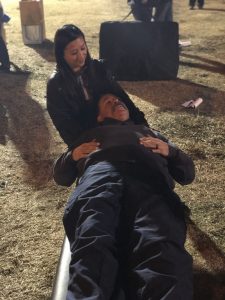 A common theme we saw amongst these heroes was that they suffered from upper back tension from stress and carrying equipment, low back, and neck issues from sitting in the trucks for prolonged periods of time and sleeping in the engines during their 24-hour shifts, and misaligned ribs from the hard respiration they encounter in the smoke. Breathing effectively is a key component to staying active and pain-free. Most people do not realize that breathing polluted air or breathing wrong can cause multiple musculoskeletal dysfunctions.

From Chico to the Bay Area, since the fire started we have been able to relieve our patients of problems as a result of the smoke:  chest congestion, tension headaches, upper back stiffness, and rib pain from forced and heavy breathing. The effects from the smoke were so significant that we found it worthwhile to wait in a thirty-minute line at our local Ace Hardware store to purchase masks for our patients. Simply put: if you’re not breathing right, you’re not living right. If you find yourself having a tough time breathing, please don’t mask the pain and give a cold shoulder to your body’s needs. Make sure to come into our office, grab a mask, get treated, and leave feeling as if you can take on the world! 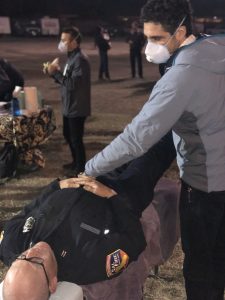